Even Conservation Changes Over Time


Cape Cod Times Opinion, March 23, 2012
Last weekend, at the invitation of botanist Nancy Wigley of Woods Hole, I revisited a seven-acre parcel I donated to the Sandwich Conservation Trust 26 years ago. The parcel off Roos Road was mixed woods and clearings that abutted my then-cranberry farm. When Sandwich was being rapidly suburbanized, I was apprehensive about getting hemmed in, and the gentleman who owned the property gave me right of first refusal on his land. It felt like an offer I couldn't refuse.
I had a hunch farming would be a smaller part of Cape Cod's future than it was in the past, but that quiet walks in the woods would always be cherished. For many years, John Cullity, founder and president of the Sandwich Conservation Trust, had been a friend and mentor so I asked him if that parcel would be a worthy acquisition for the trust. He said yes, and after a bit of paperwork, "Joe's Woods" became the trust's.
We agreed to name the parcel after the previous owner, Joe Bois, denoting his legacy to Sandwich, where he loved vacationing. Bois is a French name that translates to wood in English, so "Joe's Woods" made a good fit. While I remained an abutter, I continued to enjoy walks and cross-country skiing until I sold the farm eight years ago. I've only been back a few times since, even though I moved only 10 miles away.
Strolling through Joe's Woods with botanists, we were joined by the new owners, arborists who have reconfigured the cranberry bogs into a series of ponds and tree plantings. They asked me then, as others have, if I miss raising cranberries. The answer is no. I loved my 33 years of farming, but life is too short to do everything — it's barely long enough to do more than one thing. It doesn't bother me that my old farm has been replanted. Growth and change are part of land stewardship, as they are for many activities.
A symphony sounds better if you know something about melody, harmony and the development of musical instruments. In the same way, a nature walk is more fulfilling when you know the names and relationships of the species. A fascinating aspect of our walk was being accompanied by botanists who can identify so much flora — from the tiny, daisy-like Whitlow grass already blooming in rough dirt, to the abundance of moisture-loving heaths, such as cranberries, blueberries, swamp azaleas and sheep laurel. When you know more, you appreciate more.
The most heartening aspect of the walk was that Joe's Woods has been joined by other parcels subsequently acquired with land bank funds, and managed by the Sandwich Conservation Commission. The combined block now totals about 35 acres and includes two ponds and cranberry bogs abandoned in the 1950s. Many times I've wondered if I did the right thing donating Joe's Woods. Should I have gone for the gold instead? Might the donated parcel have been unappreciated? As it turned out, thanks to Mr. Cullity's and other conservationists' unflagging efforts, Joe's Woods has become the nucleus of a large area that nature lovers can enjoy for decades to come.
My current neighborhood is laced with Bourne Conservation Trust lands, the legacy of forward-looking people there, who have managed to keep the town homey, nautical and dotted with quiet spaces all at the same time. Well-coordinated conservation efforts have popped up in other Cape towns and they thrive through the low-profile dedication of philanthropists and volunteers.
Conservation is a tough juggling act in a hectic world. Considering how long the Cape's been inhabited, how many demands have pressed upon this fragile peninsula and how popular it remains, it's a wonder that the Cape remains precious and well-loved. Don't ever take Cape Cod conservation for granted. Nature provides the raw material, but it still requires dedicated leadership for the long run.
Tom Gelsthorpe, a sailor and former farmer, lives in Cataumet. Call him at 508-564-4919 or email thomasgelsthorpe@gmail.co
Posted by SCT at 2:55 PM No comments:

Invasive plants are increasingly in the news, and it’s the fast growth, difficulty of removal, and filling in of the landscape that gets our attention. Trees become smothered with tough, snake-like Asian Bittersweet, wet spots are jammed full of bamboo-like Giant Knotweed. Impenetrable interlocking domes of Multiflora Rose defy removal, and even seem to reach out and grab us. These unwelcome visitors, once introduced from Europe or Asia, displace native plants important to local wildlife and lead to a reduction in healthy biodiversity.
﻿
Here in Sandwich I would venture that the most visible invasive, and possibly the most damaging is Common Reed, or Phragmites australis. For the last several decades this giant member of the grass family has been filling up our once beautiful inner salt marshes, and ringing the large open marshes. This process is damaging because salt marshes are incredibly rich and productive nursery grounds for the lower levels of the marine food chain that leads to the ocean fish we rely on as food.

Sandwich is among the Cape Cod towns that have many areas of marsh adjacent to roads – highly visible, and much appreciated by tourists and locals alike. It’s not news to Sandwich residents that we are rapidly losing our marsh views to thick, tall stands of phragmites, and this certainly doesn’t help our tourism economy.

The best example of this type of loss is the inner marsh of Sandwich Village surrounding Brady’s Island, a town conservation area. Anyone who has lived here more than twenty years remembers how unique and beautiful this landscape was – from a car driving along Route 6A and Tupper Road in particular, we could glance across the marsh and clearly see the other side of the village. There used to be several spots along Route 6A where we were refreshed with pleasing marsh views, but these are mostly gone, filled in with phragmites. 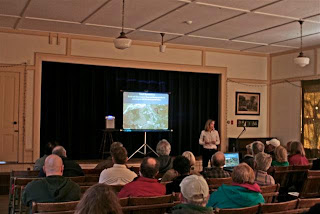 Many residents are concerned about this problem, and wonder what can be done. In response to this need the Sandwich Conservation Trust held a free public informational meeting on phragmites on Sunday, March 11, 2012.  The speakers were two scientists with years of hands-on salt marsh experience. Tara Nye has been staff biologist for the Association for the Preservation of Cape Cod for ten years. She directs a salt marsh monitoring program that studies the health of tidally restricted marshes on Cape Cod. Dick Payne is a retired physical oceanographer who worked for the Woods Hole Oceanographic Institute. He has been studying phragmites on his own for ten years, and has experimented with several methods of control.

After the program there was a walk over to the Game Farm preserve, where, among many interesting natural features, we saw plenty of phragmites.
Posted by FYI World Media at 11:41 PM


On Sunday, March 11, at 1:00 P.M the Sandwich Conservation Trust sponsored an informative and educational Phragmites (common reed) program at the East Sandwich Grange Hall on Old County Road. The presentation by Tara Nye, staff biologist of the Association to Preserve Cape Cod, and Dick Payne, Chairman, Falmouth Wetlands Invasives Steering Committee, explained the explosive spread and threat of this invasive wetland plant. This tall non-native plant displaces native species, reduces biodiversity, offers little value for wildlife, chokes waterways and has the potential to dominate our salt marshes, as well as the shorelines of our fresh water ponds. After the talks there was a walk to the marsh behind the Grange Hall, which contains Phragmites, which was viewed first hand. 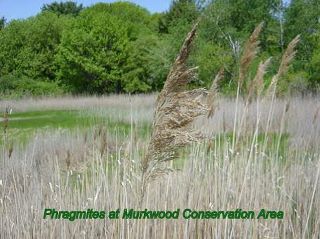 The saltmarsh creek here is bordered and punctuated by large groves of cedar, pitch pine, scrub oak and tupelo trees. As with many saltmarshes in the United States, there are also a large amount of Phragmites, a tall pervasive grass that seems to be everywhere now, from highway medians to open fields. These crowd out native grasses and do harm to any species of insect, bird or animal that rely on the native plants. By outcompeting native vegetation and reducing the viability of salt marsh habitat, this invasive species is having devastating effects on the local ecological system.
Posted by FYI World Media at 12:15 AM

Well wooded, wetland edge, among big trees, thorny bushes adjacent to regrown cranberry bogs make this 4.86-acre parcel a haven for many birds. Located on that part of the land where the salt water meets the fresh, the trails meandering under dark, wooded canopy are a quiet place to walk and think.
Walking is easy, signs are located on trees, and several benches and wooden bridges offer places to sit and gaze.
Elinor's Woods was donated by Robert A. Sprague in memory of his late wife. The trail system was designed and laid out by Boy Scout Neil Irving in 1999.
Pets are allowed on leash. No motor/wheeled vehicles permitted. Parking lot is accessed by taking a left on Barnard Way immediately after post office box for #57 on left side of Ploughed Neck Road.  Parking is available in the lot for 3 small cars. 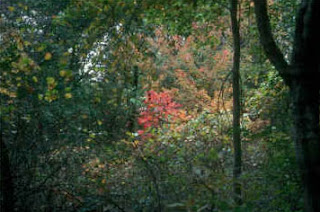