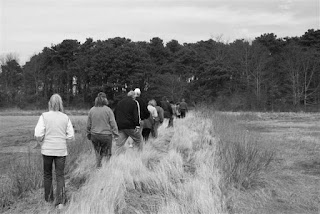 
Of the ten or eleven walks led by the Sandwich Conservation Trust, there is one where a tide chart is critical – a visit to the three islands in Spring Hill Marsh, a peaceful, wide-open place.  I can always count on SCT Vice President Joe Queenan to provide the tide information – he’s a boater who lives near Scorton Creek.  He has determined that on this coming Sunday April 15th, the low afternoon tide should enable us to comfortably cross the ancient, worn dike leading out to Great Island, and hike the island’s edge.

Great Island is probably eight or nine acres in size, and quite irregular in shape - the five or so coves add greatly to its visual charms.  A trail runs the length of the island, which is owned by the Town of Sandwich, the Thornton Burgess Society, and private owners, but the 250 foot dike and adjacent marsh is owned by the SCT, a bequest of the late Dr. Shirley Cross of Spring Hill.  This was once wide enough to accommodate oxen and farm vehicles.  It is a reasonable guess that in the 17th century firewood and timber were removed first, then, for two-and-half centuries or so it was mowed for the hay, or pastured.  Pitch pine is now the predominant tree, with some oak.

Pine Island, to the west, is between two and three acres in size, and is also a pine-oak forest.  The Burgess Society owns the west side, a gift of Gifford Foster, and the SCT owns the eastern portion, a gift of Judith and Malcolm Reiss.  Gifford’s father was the renowned John Foster (1853-1935), a ballroom dance teacher who did very well, and built a large, unusual house up on the west end of Spring Hill.  Spring Hill farmer Huck King (1906-1976) once told me that John Foster, as a bit of a novelty, once had his portion of Pine Island plowed up and planted to beans, and jokingly referred to it as Bean Island.  I believe he also called it Frank’s Island, in honor of his close pal Frank Wing.

Little Island, about 100 feet in diameter, lies to the north of Great Island, and has a mixture of only those tough, scrubby trees and shrubs that can survive in such a marginal environment – bayberry, blueberry, poison ivy, maybe a red cedar or two.  This island we regard from a distance, as it takes some creek jumping to get out there.  Years ago it was a premium spot for duck hunters.  Half of this island and seven acres of marsh was donated to the SCT in 1993 by Kenneth and Dorothea Luce.

Trusting that Joe is correct with his tide data, let’s hope for a pleasant day, and take the walk.  From Route 6A, take Great Island Road in a few hundred feet, cross the railroad, and turn right into the entrance to the Toolas Preserve where there is a field for parking.  We will begin at 2 PM, and please take note that although not leafed out yet, there are some poison ivy shoots to the side of the Great Island path.  Ticks are also a possibility.  The walk will last an hour or so.