The featured guest at the SCT Annual Meeting will be Brian Malone, who will speak on TURKEY REVIVAL ON CAPE COD.  How and when did turkeys become re-established on Cape Cod?  What is the pattern of their roving lifestyle?  How do they survive winter and predators?  Brian, a retired natural resources officer, will answer these and other question about the big birds which are becoming so familiar to us.  Brian presents an entertaining and informative presentation.  This is also an opportunity to share your turkey stories and hear others as well.

There are seemingly wild turkeys everywhere these days.  A year or two ago we received occasional reports or photographs of flocks of turkeys from various parts of town.  But in recent months we have been receiving reports almost weekly.  What is also different is that it is not only flocks but single or pairs of birds that are being sighted, and some very close at hand.

These sightings are events of some interest if not excitement.  A turkey in the Enterprise parking lot in Falmouth brought staff to the windows for a look.  An East Falmouth resident who tried to take a photograph of a visiting hen got a little more excitement than he bargained for when the bird turned on him.  Turns out she had a brood of poults with her.

The return of turkeys is a great success story for wildlife managers.  Turkeys, as with other wildlife, were thinned out by land clearing and hunting in the early to mid-1800s.  By the 1930s there was concern about whether wild turkeys would survive as a species.

Bringing them back wasn't easy.  Wild turkeys cannot be raised in captivity and released.  Their survival skills are learned, not inherited, so young turkeys have to be raised in the wild.  Wildlife managers realized that if wild birds are captured and moved to an area where there are none, they will do quite well.  Perhaps it is because they learn survival skills that we are beginning to see so many in the midst of settled neighborhoods.  They cannot be hunted near homes and many yards have bird feeders.

We are reminded of the story of coyotes.  Some years ago it was remarkable to see one.  Our recollection is that many of those sighted back then were small, wary and often mangy.  Coyotes have learned to live well among humans and the coyotes among us today are large and healthy.  And sighting a coyote is not particularly remarkable.  It might be the same with turkeys.  They seem to be as common as crows today.  But they are not crows, and their numbers are dependent on a number of variables.  They are susceptible to predation and even weather, which can affect their food sources.  It might be their numbers will decline sharply within a short time.  Turkeys are magnificent birds; they are very large and surprisingly colorful when seen in the right light. We should appreciate having them in our midst.

Tell your friends and neighbors to join you at this enlightening talk. Start practicing your turkey calls now! 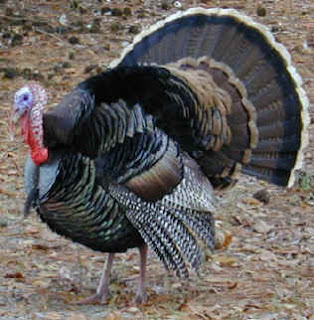