Have you noticed our signs around town to remind us of Earth Day and to support your local land trust in an effort to preserve our land?  You will also see us at the Daffodil Festival on Saturday - please stop by and say hi. 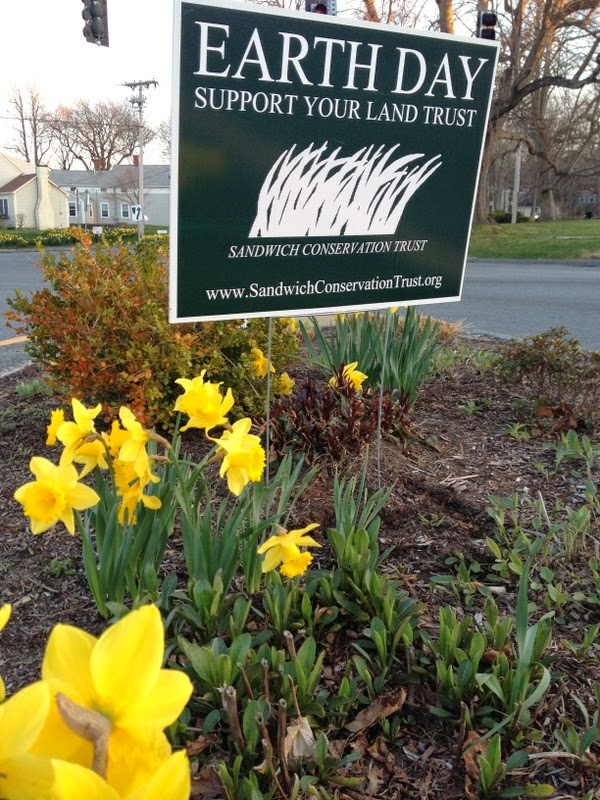 Earth Day, what is it?

Founded in 1970 as a day of education about environmental issues, Earth Day is now a globally celebrated holiday that is sometimes extended into Earth Week, a full seven days of events focused on green awareness. The brainchild of Senator Gaylord Nelson and inspired by the antiwar protests of the late 1960s, Earth Day was originally aimed at creating a mass environmental movement. It began as a “national teach-in on the environment” and was held on April 22 to maximize the number of students that could be reached on university campuses. By raising public awareness of air and water pollution, Nelson hoped to bring environmental causes into the national spotlight.

By the early 1960s Americans were becoming aware of the effects of pollution on the environment. Rachel Carson’s 1962 bestseller “Silent Spring” raised the specter of the dangerous effects of pesticides on America’s countrysides. Later in the decade, a 1969 fire on Cleveland’s Cuyahoga River shed light on the problem of chemical waste disposal. Until that time, protecting the planet’s natural resources was not part of the national political agenda, and the number of activists devoted to large-scale issues such as industrial pollution was minimal. Factories pumped pollutants into the air, lakes and rivers with few legal consequences. Big, gas-guzzling cars were considered a sign of prosperity. Only a small portion of the American population was familiar with–let alone practiced–recycling.

A highlight of the United Nations' Earth Day celebration in New York City is the ringing of the Peace Bell, a gift from Japan, at the exact moment of the vernal equinox. Elected to the U.S. Senate in 1962, Senator Gaylord Nelson, a Democrat from Wisconsin, was determined to convince the federal government that the planet was at risk. In 1969, Nelson, considered one of the leaders of the modern environmental movement, developed the idea for Earth Day after being inspired by the anti-Vietnam War “teach-ins” that were taking place on college campuses around the United States. According to Nelson, he envisioned a large-scale, grassroots environmental demonstration “to shake up the political establishment and force this issue onto the national agenda.”

Nelson announced the Earth Day concept at a conference in Seattle in the fall of 1969 and invited the entire nation to get involved. He later recalled, “The wire services carried the story from coast to coast. The response was electric. It took off like gangbusters. Telegrams, letters and telephone inquiries poured in from all across the country. The American people finally had a forum to express its concern about what was happening to the land, rivers, lakes and air—and they did so with spectacular exuberance.” Dennis Hayes, a young activist who had served as student president at Stanford University, was selected as Earth Day’s national coordinator, and he worked with an army of student volunteers and several staff members from Nelson’s Senate office to organize the project. According to Nelson, “Earth Day worked because of the spontaneous response at the grassroots level. We had neither the time nor resources to organize 20 million demonstrators and the thousands of schools and local communities that participated. That was the remarkable thing about Earth Day. It organized itself.”

On April 22, rallies were held in Philadelphia, Chicago, Los Angeles and most other American cities, according to the Environmental Protection Agency. In New York City, Mayor John Lindsay closed off a portion of Fifth Avenue to traffic for several hours and spoke at a rally in Union Square with actors Paul Newman and Ali McGraw. In Washington, D.C., thousands of people listened to speeches and performances by singer Pete Seeger and others, and Congress went into recess so its members could speak to their constituents at Earth Day events.

The first Earth Day was effective at raising awareness about environmental issues and transforming public attitudes. According to the Environmental Protection Agency, “Public opinion polls indicate that a permanent change in national priorities followed Earth Day 1970. When polled in May 1971, 25 percent of the U.S. public declared protecting the environment to be an important goal, a 2,500 percent increase over 1969.” Earth Day kicked off the “Environmental decade with a bang,” as Senator Nelson later put it. During the 1970s, a number of important pieces of environmental legislation were passed, among them the Clean Air Act, the Water Quality Improvement Act, the Endangered Species Act, the Toxic Substances Control Act and the Surface Mining Control and Reclamation Act. Another key development was the establishment in December 1970 of the Environmental Protection Agency, which was tasked with protecting human health and safeguarding the natural environment—air, water and land.

Since 1970, Earth Day celebrations have grown. In 1990, Earth Day went global, with 200 million people in over 140 nations participating, according to the Earth Day Network (EDN), a nonprofit organization that coordinates Earth Day activities. In 2000, Earth Day focused on clean energy and involved hundreds of millions of people in 184 countries and 5,000 environmental groups, according to EDN. Activities ranged from a traveling, talking drum chain in Gabon, Africa, to a gathering of hundreds of thousands of people at the National Mall in Washington, D.C. Today, the Earth Day Network collaborates with more than 17,000 partners and organizations in 174 countries. According to EDN, more than 1 billion people are involved in Earth Day activities, making it “the largest secular civic event in the world.”