In 1994 the Sandwich Conservation Trust was approached by Ploughed Neck Road resident, Robert Sprague, about a possible donation of land adjacent to his house.  It was an interesting piece, nearly 5 acres, with some road frontage.  It was heavily wooded lowland, rising gradually out of the salt marsh west of Ploughed Neck Road.  Bob did give us the land, in loving memory of his late wife Elinor.  He also joined the SCT as a trustee for eleven years, before moving to Florida.  Bob died on September 12th, and it seems appropriate to have a walk in Elinor’s Woods.

In 1998, a trail system was installed by a group of volunteers led by Neil Irving as part of his Eagle Scout project, with access from a private road.  The preserve was enlarged by the 2006 purchase of an adjacent 4,400 square foot parcel, and this allowed us to create a much better entrance on Ploughed Neck Road itself.  This work, along with signs and other improvements was led by another Eagle Scout candidate in 2008, Chris Hall.   The trail system winds around in a way that makes the parcel seem larger than it is.  There are some fine specimens of large, native trees.

If you would like to become familiar with Elinor’s Woods, the SCT is conducting a walk there this Sunday, November 13th,  at 2 P.M.  The walk will last an hour or so.  The terrain is level and easy to walk.  We will meet at the town-owned gravel parking lot at the corner of Ploughed Neck Road and North Shore Boulevard, and hike back on the paved road to Elinor’s Woods.  The walk will not take place if it is raining. Call me at (508) 888-7629 if you have questions.  You can learn about the SCT at www.sandwichconservationtrust.org.

If you aren't a member of the Sandwich Conservation Trust, you don't receive a copy of the newsletter so we are posting a link to the pdf copy.  This year we upgraded from publishing in black and white to color!  That, in addition to all the news John reported on, makes for an excellent summary of the accomplishments this year.

Don't forget to send in your dues for 2016, as we are counting on you so we can continue conserving properties in town. 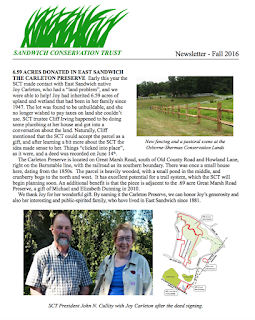