Greetings to you once again from the SCT trustees, and we hope that you are staying safe and well.  At least we’ve got the summer weather to enjoy, though drought conditions exist as I write this.  We can, however, be comfortably outdoors, active, a little safer, and as we pointed out in our last newsletter, we can visit our many and varied conservation lands.

In this issue I continue the theme of looking at conservation land through history, as much as available maps, photographs and information allow.  I’m thinking of it as a recurring column, and I’ve chosen what I think is an appropriate name:  Land Through Time.  This approach hopefully makes the lands more interesting and meaningful.

We last looked at the Goodell Preserve in East Sandwich, 16 acres of marsh that lie along a straight, fast-moving stretch of Route 6A; a preserve that has no trail system but offers visual refreshment, valuable habitat, and which was donated in honor of a beloved parent.  In this issue we will examine another SCT preserve that shares all of these qualities, but is very different in character – the Cross Preserve.

Before we begin, I want to thank the members who responded to our recent dues reminder letter during this difficult time.  We had a good response – a needed boost!  I will also take this opportunity to thank the SCT Board of Trustees – a devoted and hard working group of volunteers.

The Cross Preserve by the Two Ponds

Route 6A is a wonderful old road, with interesting scenery and a good share of the attractive antiquity that we associate with Cape Cod.  It has been through some changes (read: straightening) that are bound to come with population and tourism growth, but it still more or less follows the route of the County Road laid out in 1684 by the colonists.  This early “highway”, as it was sometimes referred to in town records, was itself based on the very ancient Native American pathway that led down the Cape. This path had very little straightness to it, for it had to follow what the untouched topography dictated: around hills, swamps large and small, and salt marsh inlets.  As civilization progressed, with animal power and iron tools the way became straighter: a cut into a banking here and there, a simple wooden bridge, earthen causeways across swamps and salt marshes.  More on this later.

The Cross Preserve is located on the north side of Route 6A just west of the busy intersection with Quaker Meetinghouse Road, and adjacent to the water feature commonly called “the Two Ponds”.  It is bounded on the north by the railroad. The preserve is 2.56 acres, much of it wetland, and provides 518 feet of forest edge along this straight stretch.  My guess is that in the interest of safety few drivers turn their heads to look at these woods, or study the green SCT sign tucked into the edge.  Even so, it’s a nice bit of undeveloped woods and it will stay that way.

We are thankful to Peter N. Cross of Boxford, MA, who donated this parcel to the SCT in 2006 in honor of his parents Dr. Shirley G. Cross and Dr. Chester Cross, both remarkable citizens of Sandwich. They moved to Sandwich in 1941, with an interest in cranberries.  Their home was at 10 Spring Hill Road, in the ¾ Cape built by Joseph Nye in 1837.  They also purchased three cranberry bogs near Hoxie Pond in East Sandwich, which they farmed into the mid-1980s.

The Crosses had many talents, were hard workers, charmingly old-fashioned, and active in town committees.  Shirley specialized in botany, and began the wildflower garden named after her at the Green Briar Nature Center.  For some years she served as president of the Thornton W. Burgess Society.  Chet worked for, and in time was head of, the Cranberry Experimental Station in Wareham.

He served on the Sandwich Planning Board for many years.  Shirley joined the Conservation Commission in the 1960s.  They were both passionate about preserving land and worked together on some important acquisitions.  At the first town meeting I attended in 1972, I was impressed with their effort to convince the meeting to purchase 27 acres of Sandy Neck lying in Sandwich.  They also fought hard (and there was resistance!) for the Briarpatch, the Ryder property and other important parcels.  They were my inspiration to become involved with land preservation.  I drive by the Cross Preserve nearly every day, and I often glance at the woods and the sign and think of Chet and Shirley and how much they loved this town. 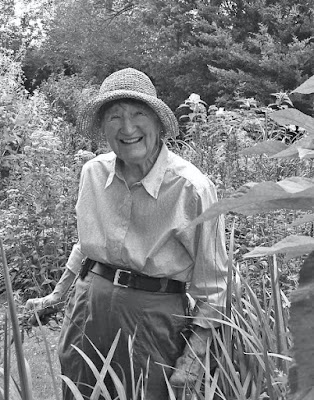 Shirley Cross 1916-2008
This preserve was once part of a wetland referred to as “the Canoe Swamp” in 17th century town records.  Unsuitable for farming, it may have served as a woodlot connected to the farm at the corner of 6A and Quaker Meetinghouse Road.  It was acquired by the Overseers of the Sandwich Monthly Meeting of Friends (Quakers) at some point, and it is from that group that Peter Cross acquired this piece in 1976.
It’s now time to consider an important question about the “Two Ponds”: When were they created by putting the main road through and where did it run previously? 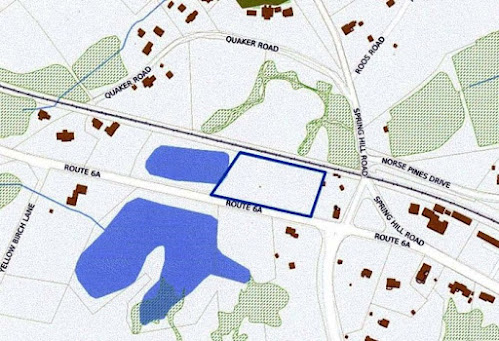 The Cross Preserve is outlined on this map taken from the Town of Sandwich website.  Note how
Quaker Road (now partially discontinued) makes a large bow north of the Two Ponds.  At the top of the map is the 1810 Quaker Meetinghouse and associated buildings. This was the original path of the
County Road – all traffic – pedestrians, horse and oxen drawn vehicles, even herds of cattle with their market-bound drovers used this route by the Friends meetinghouse, to avoid the Canoe Swamp. 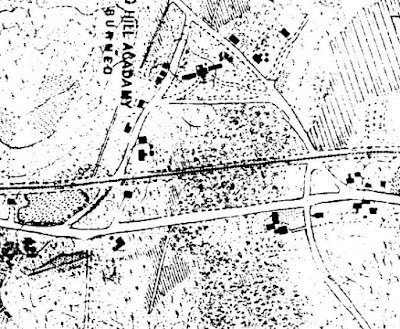 This portion of the U.S. Coastal Survey of 1861 shows the Two Ponds area when it was
meadow and swamp. According to the late Sandwich Archivist Barbara Gill, the earthen
causeway supporting the road was built in 1832 to make travel easier. A related question
would be, where did the large amount of fill come from? 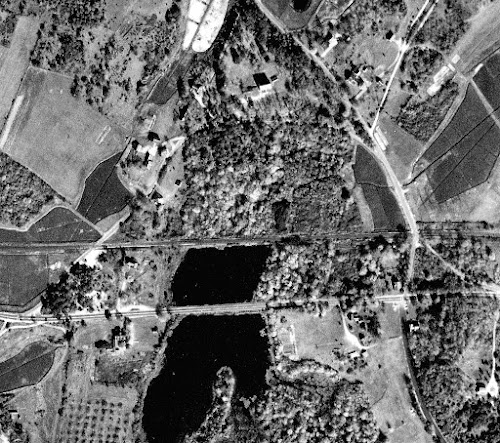 The Two Ponds were likely created in the 1880s or 90s when cranberry bogs were constructed in the wetlands leading from Spring Hill Road out towards the beach. The upper part of the Two Pond area had many springs. At some point a reservoir for flooding the bogs below was created by raising the water level at the culvert that runs under the railroad. The constant flow of the springs made this operation possible. This portion of a 1951 aerial photo shows what was then still an agricultural landscape. Sandwich Archives photo. 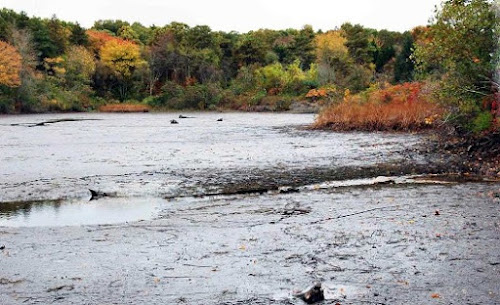 In 2007 the cranberry bog owner drained the Two Ponds, probably to flood the bogs below for water-picking. This shows one of the springs, which in colonial times undoubtedly served the William Allen house, which was built a short distance uphill in 1672. It was taken down in the 1880s. The land south of the Two Ponds is the 46 acre“Sullivan Piece”, purchased by the town for conservation in 1986.

This 2013 view looking towards the Cross Preserve shows the ponds drained again (left).

The same view in 2020, with the pond in place but quite full of water lilies (right). 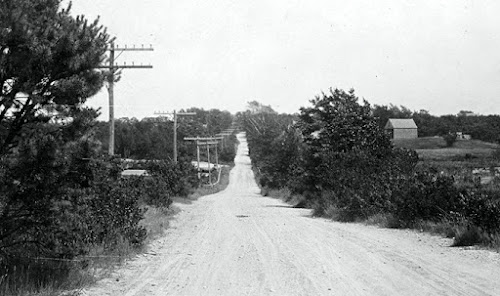 This view is from a pre-1910 postcard looking towards East Sandwich.

The end of the Cross Preserve can be seen. Note the early telephone poles.

In July I visited the Cross Preserve and took a few pictures in the thick growth. I was impressed by the
variety and size of trees growing on the higher land at the west end. I found white and black oak, red
maple, pitch pine, white pine, a black willow, a big multi-trunked holly and one tall, straight aspen. As
stated earlier, there is no trail system, no parking, just a nice piece of woods and wetland, with some
scenic water-frontage.

Once again, our thanks go to Peter Cross for his gift, and to his worthy parents who did so much for the
Town of Sandwich. 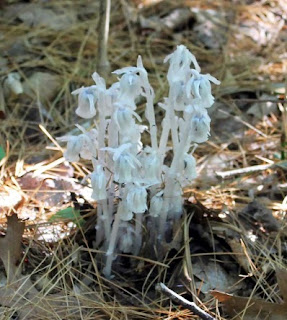 In the moist shade, this Indian Pipe or Ghost Plant (Monotropa uniflora) was found
at the Cross Preserve. Instead of utilizing sunlight and chlorophyll to grow,
it is a parasite, obtaining nutrients from tree roots via a particular fungus host.

Except as noted, images were taken by or owned by the author.

If you wish to learn more about the SCT, visit our website, where you can also download a membership form. We also gratefully accept donations to our Land Maintenance Fund. Thank you!

You can download the PDF version of the SCT E-Newsletter here:
https://drive.google.com/file/d/1Y3lGpB79K2tOCDaFQBieg5nEvP4_l5DS/view?usp=sharing
Posted by SCT at 7:38 PM